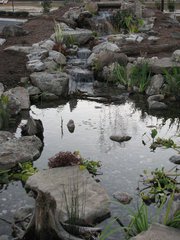 Here at American Aquascapes we take great pride involving our customer’s dreams and our company’s expertise to create the ultimate back yard paradise. Founded in 1996, American Aquascapes is an award-winning, professional pond service business. Located in Graham, North Carolina (Near Raleigh & Chapel Hill) we have provided North Carolina, Virginia, Tennessee, & South Carolina with affordable water feature designs, construction, maintenance, and repairs. We design one of a kind water features, using a collection of the most elegant stone available today with certified state-of-the-art products and the creative talents of our designers at American Aquascapes. Over the past 15 years we have supplied hundreds of residential customers and businesses with unique water garden features. Whether you are looking to have a simple rushing water fountain, a complex koi pond with a peaceful waterfall, or maybe even a pondless waterfall, we are the team to bring theses dreams to life.

A Little History About Our Company . . .

(Your Paradise = Our Passion) 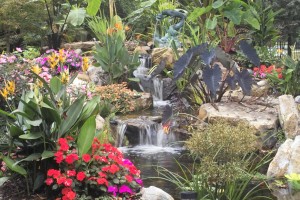 So as you can see, we have made a great name for ourselves over the years – Let us help you create your perfect pond paradise . . . It’s what we do best!